Working with Irn Bru is a Scottish dream! And for a digital marketer in the making, being part of a social media campaign for their Christmas advert was the icing on top of the dream cake. From my post being stumbled upon by sheer coincidence to having my first experience with Facebook Live it was a part if my life I will never forget.

Though I can honestly say there was a brief moment afterwards where I was on a bit of a low about it all. I guess that’s something they never tell you about being centre stage on social media. Everyone tells you to beware the internet trolls but no one mentions the lows that happens after the campaign is over. It wasn’t the fact that any attention of me was gone, it was rather that it was all that people around me talked about for days. Now I know what you are all saying ‘why would you hate that?’ and I don’t really have an answer to that. Maybe it was the realisation that the dream was over, maybe it was some of the reactions, maybe it was just some post campaign/acting blues or maybe it was a bit of everything.

Either way it lasted a little while then it was replaced with acceptance and a new sense of pride. It is something that I can tell stories about for the rest of my life, it even made its way onto the news. It also gave me an understanding into the world of large scale media campaigns and every step that’s involved not just the social media posts.

Get back to the point Emma

Anyways going back to the beginning of this post and back on track, it was a part of my life I will never forget so I think it’s time I share how it happened. I mentioned at the start of this blog that I was stumbled upon and its true I was, they found a tweet I posted years ago and asked me to be apart of their Christmas advert launch. 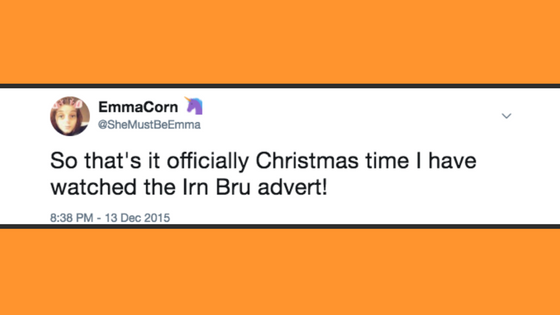 For four weeks I was not allowed to mention anything about my involvement. Which although at first was easy it was actually more difficult than I thought. Especially when my Digital Marketing course were talking about the lack of The Snowman advert on TV the closer it got to December. All I wanted to do was say ‘I KNOW WHAT’S HAPPENING!’ .

With the final week (launch week) I was really put to the test. My twitter exploded with comments and mentions,  I was getting tagged so many times on facebook, it even seeped its way back into my lecture room -Though that story is hilarious but for another time maybe- it was just crazy. Fun to see when my social media silence ended but crazy when looking at the my twitter analytics. I went from having like no mentions, impressions or profile visits to getting 58 mentions, over 45k impressions and 5000 profile visits… it was insane for me.

Look at me getting of track again, what was I saying again… oh yeah the final week really put my silence to the test but it payed off for me at the end. The end being launch day, what a day that was. Watching the crew at Leith put up that giant TV screen made the reality of what was happening all the more real and exciting. I then met Ronni(you can check him out here) for the first time and got to hear his thoughts on what was going on from there on out it was rehearsals for the main event. That’s right guys as much as it was shot live at five on Facebook it was rehearsed before hand. For me these rehearsals were fun as it made my short screen time more memorable and allowed me to act again. Something I hadn’t done in a while and once it was done it was like I had been in a dream. Everything was put away and the team left. Though they did forget the giant tweet sign they made showing my tweet so alongside the posts I do have a tangible memento.

So there you all have it, a rather long shorthanded version of my Irn Bru experience. If anyone wants to know more feel free to contact me.

This site uses Akismet to reduce spam. Learn how your comment data is processed.